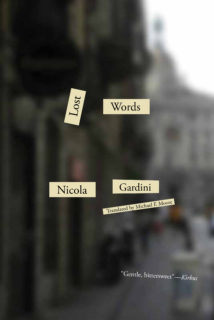 Inside an apartment building on the outskirts of Milan, the working-class residents gossip, quarrel, and conspire against each other. Viewed through the eyes of Chino, an impressionable thirteen-year-old boy whose mother is the building’s concierge, the world contained within these walls is tiny, hypocritical, and mean-spirited: a constant struggle. Chino finds escape in reading.

A new resident, Amelia Lynd, moves in and quickly becomes an unlikely companion to Chino. Ms. Lynd—an elderly, erudite British woman—nurtures his taste in literature, introduces him to the life of the mind, and offers a counter- point to the only version of reality he’s known. On one level, Lost Words is an engrossing coming-of-age tale set in the ’70s, when Italy was going through tumultuous social changes, and on another, it is a powerful meditation on language, literature, and culture.